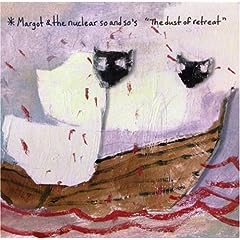 Margot & The Nuclear So And So’s

Although I’m well-aware that 3hive posted this band a mere five days ago (that post is where I heard of them, after all), their sheer awesomeness compels me to post them despite the incredibly blatant blog-thievery. I will attempt to remedy this issue by talking about them more thoroughly.

Margot & The Nuclear So And So’s, while having an entirely indecipherable name, play some of the most accessible, rockin’ tunes I’ve heard in a while. Though most of their songs don’t remind me of any particular band, the ones that do are probably my favorites. To sum those up, the chorus of Paper Kitten Nightmare sounds like Weezer’s old style of choruses; Vampires In Blue Dresses reminds me of Ben Kweller – the vocals, the song, the lyrics, everything (except for the drums at the end!) – and I cannot explain in words just how glorious that song is; and Jen Is Bringin’ The Drugs reminds me of Bright Eyes. Unfortunately, none of those songs are offered for download, but Skeleton Key is, and as it was my introduction to the band, so shall it be yours!