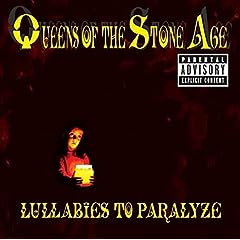 Delving even further into the world of supremely excellent mainstream (or at least, more mainstream than usual) music, we have Queens of the Stone Age (QOTSA) with their latest (2005) release Lullabies to Paralyze. I shall tell you this, though: I have never been disappointed with what these folks output, and this album is no exception to that dandy rule.

Lullabies features that wonderful sound that we’ve all (or at least, some of us) come to know and love. If you’ve never listened to QOTSA before, you might say that these guys were simply a hardcore “raaar!” band. Luckily, I am here to tell you that they are not: their music has feeling to it, rather than a haphazard collection of screaming and stupid guitar riffs. Josh Homme’s voice is perfect for the music that they play: a pleasing mix of a somewhat ethereal voice (Long Slow Goodbye) and a voice with more gutso (Everybody Knows That You Are Insane and In My Head). The music isn’t boring either, which may be what you are thinking when looking at my catergorisation of them as “stoner rock”. Thanks to my lousy explanations, you’ve probably no idea what they sound like, which is why I suggest you sample of their delightful product today!

Like Norah Jones, QOTSA’s site is plagued by flash. There is some media on their site, though!