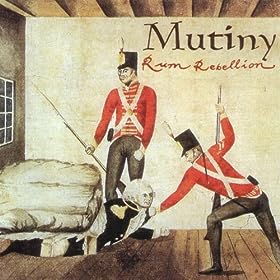 When I saw the World/Inferno Friendship Society play for the first time, I also inadvertently ended up finding out about all kinds of other bands. I would say “similar bands”, but that is somewhat impossible. However, there is a slight resemblance, in terms of reckless style. I found Mischief Brew and Guignol and Nanuchka this way, and likewise I found Mutiny.

I could cut this review short and simply give you a two-word review: pirate-folk. Think, raspy voice, the occasional female vocals, and more fiddles than you can probably handle. I’ll leave you with some samples, as that’s the best I can find, as hearing them does them a bit more justice.