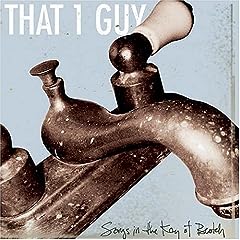 It has been brought to my attention that lately, more than ever, I listen to crazy music. Even just a few months ago, crazy for me just meant some Ween or gypsy punk. Nowadays, it usually means something circus-related. That 1 Guy continues the tradition of crazy music, though more along the styles of Ween and Primus. He plays all his songs with his home-made instrument, “The Magic Pipe.” It is indeed magical, the number of things he is able to do with it, but it’s still the lyrics that stand out more for me. When is the last time you heard a song about weasel potpie (and titled as such!), or one about raining meat? And when is the last time they were actually catchy, and well-sung? And when is the last time they were on an album with such an awesome name as Songs In The Key Of Beotch? The answer is never, until now!