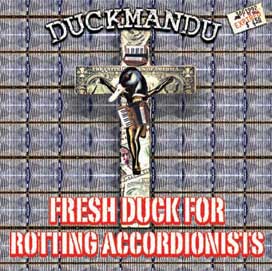 I am, in all other instances, not one to post about a musician who covers other people’s songs. But when they take the Dead Kennedy’s debut album and replace the guitars with accordions, I am sorry, but there is no way that I cannot talk about it! Even more awesomely, Duckmandu singer Aaron Seeman even has a fairly similar voice to that of Jello Biafra, so with a bit of imagination, you can pretend that Fresh Duck For Rotting Accordionists is an unreleased alternate version of the original album, where they used accordions. OK… maybe more than a bit of imagination. As a bonus, at least for Doug, Jason Webley sings backing vocals on a few tracks (none of these, though).