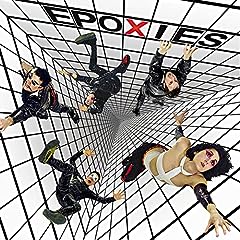 There have not been any posts in a good while, but that is because I didn’t know The Epoxies had any MP3s up (OK, that is not the only reason). If I had been privy to the knowledge that Radiation was just sitting out there on the Internet, waiting for me to pimp it like Hank Hill pimps sweet lady propane, then pimping would have commenced previously. I have yet to listen to their self-titled debut as much as Stop The Future, but again, their debut does not have Radiation on it (not a good quote to take out of context). As opposed to most of the catchy songs whored around the world, this one has lyrical value, can you believe it? With lyrics like “I know I’d know the difference somehow / If I was being rearranged / I’m sure if I had been reprogrammed / Something somehow surely would seem strange!” you just can’t not be hooked. Aaaaaaand they’re from Portland. I am all about the Portland bands, except for when I am not.