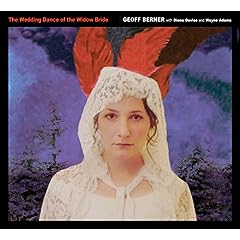 There seems to have been many ways to discover the music of Geoff Berner; while he’s been mentioned on a few semi-prominent blogs (which is where I discovered him), he’s also got a song on a compilation entitled Funky Jewish Sounds From Around The World. That compilation’s even got my favorite song of his on there, Lucky Goddamn Jew. As he sings ever-so-awesomely, “I’m a lucky goddamn Jew, lucky goddamn Jew! Got some food, got some booze, women who will sleep with me!” After that, you’ve got Good Luck Now, which is something of a sequel to that song, at least lyrically. And then you’ve got the excellent Whiskey Rabbi, which sounds like it could be a song by The Tiger Lillies, at least for the five seconds, and only because of the accordion. I really should have just posted this as “Jewish + accordion + violins = awesome,” but someone, somewhere, somehow, would get angry.

From The Wedding Dance Of The Widow Bride
Good Luck Now – (MP3, 2 MB)