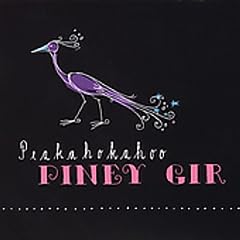 Piney Gir is another band I stole from blogs, though their name is strange enough that I would have downloaded it from Doug eventually (for he has this album as well). Anyhow, this is a band that truly sounds different with every song. From the electro-pop of Boston to the country twang of Greetings, Salutations, Goodbye to the violins on K-I-S-S-I-N-G, you really don’t know what to expect from the next song. That isn’t necessarily a good thing, but at least it keeps you on your toes.