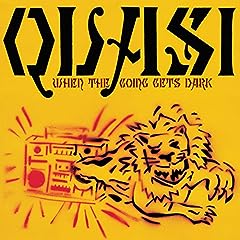 Quasi was the first band to be featured on either/or, nearly a year ago. That alone wouldn’t be enough for me to post about them again; rather, they are an exceedingly awesome band (from Portland, of course), and while I have heard some complaints about the “whiny” vocals, the lyrics are just way too damn good to pass up. But before I start spewing out a bunch of their more memorable lyrics, I should probably talk about the band themselves. There’s singer Sam Coomes, formerly of the band Heatmiser, who jams out on what is essentially a keyboard; when I saw them in concert, during some of the more chaotic keyboard moments, he would play the keyboard with his knees. It was amazing, to say the least. Besides him, there is drummer Janet Weiss, who is more well-known as the drummer for Sleater-Kinney. One thing that’s commonly said about this band is that they can make a hell of a lot of noise for just two people, and it’s definitely true. From the fittingly raucuous The Rhino to the 2nd-best breakup song ever I Never Want To See You Again (Ben Folds’ Song For The Dumped takes the cake in that department), Quasi has something for everyone. And because this post is definitely not long enough, it is time for some memorable lyrics.

“You’re the new newest thing, we’ve seen it all before / In fact I’ve seen it many times, and I’ll see it many more / You know it won’t last, you know it never does / But better to be a has-been than to be a never-was” – All The Same

“See how you grasp at the stars, so far away / You can’t even see what’s right in front of you” – I Never Want To See You Again

“I used to think love was real / But it’s just the way you feel at the moment / And when it’s gone, it’s like it never existed in the first place” – In The First Place

“It’s raining, it’s raining, there’s nothing you can do / It doesn’t only rain on you / But you’re acting all upset / Like you’re the only one who’s wet” – It’s Raining

“You need the money, so you got to play you’re dumb / But if you play it long enough, it’s just what you become” – The Happy Prole

“I used to think love was real / But it’s just the way you feel at the moment / And when it’s gone, it’s like it never existed in the first place” –