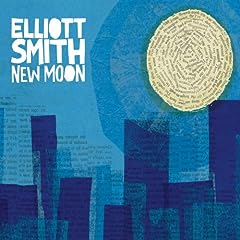 Oh ho ho, the prodigal father returns. It has indeed been a long time since I have traversed the great halls of this website, and so my writing prowess will be sub-par at best. But to reverse a life lesson from Conan O’Brien, if you can’t have quantity, you should have quality. So it only seems fitting that I’ll welcome myself back with an album review of Elliott Smith‘s second post-humous album, New Moon.

There is a double-appeal to this two-disc set, each of which serves a different type of fan. For the fans who enjoyed his music over the years but didn’t devote their lives to it, there are 24 songs to be had here, and excluding some alternate versions of both his solo work and some songs from Heatmiser, 20 of those will likely seem brand-new.

Then, for the truly obsessed fans like me… there are 24 songs! And while I’d heard all but three of them, a lot of the tracks on the actual album are cleaned up, including some of my favorites like Angel In The Snow and Going Nowhere. The best song on the entire thing is the alternate version of Pretty Mark K; the original was my least favorite song on Figure 8 and one of my least favorites of his songs overall, but this alternate version is amazing!

So, yes. This review is all about telling fans what they already know while telling nothing to the people who’ve never heard his music. But if you’re not a fan already, you should be, so check out some of his songs while you’re at it.