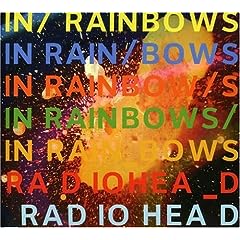 And now to make up for my lack of quality, here’s some quantity. Once upon a time, I was looking through a retail store’s sparse music section and found only two albums that I was legitimately interested in purchasing. Yes, I am a music blogger/pseudo-critic. Yes, one of these albums was Radiohead. Half my reason for buying it was just that I hadn’t heard of it at all, having been deprived of the Internet for so long. But when I realized it was 10 tracks and probably not just some single, I couldn’t not buy it. And so begins the review…

In the words of Miles Kurosky (of Beulah), “Radiohead’s the only band in the world that can change and not get shit for it.” While that’s probably not an exact quote, it sums up a common truth: Radiohead’s music changes all the time. Much of time, it could be classified as “difficult,” something that doesn’t immediately sticks to your head, but has to worm its way inside. This is unfortunate for me, because I’m a fairly impatient music listener: I’ve downloaded an album, listened to the first 5 seconds of the first song, and deleted the album. So now it is time for a truth, about me (what an ego!) Radiohead’s the only band in the world that, when I buy their album, I expect to not like it that much until the fourth or fifth listen. I’ve only listened to their new album, In Rainbows, once, so here is my quite generic summary of my opinion of it.

Many of the tracks on it bored me; though like I said, I haven’t really given it a fair shake. There were some songs that picked up the pace slightly, which doesn’t mean they are uptempo in any sense of the term. Faust ARP, House of Cards, Jigsaw Falling Into Place, and Videotape are all entirely worth a fan’s time. The rest, however, did not really work for me. Whether that’s due to my lack of devotion to either the song and/or the band, or simply just because the songs are little to be excited about, I’m not yet sure. That said, I’m sure I’ll be listening to it at least three more times before making a final judgment.

But on the plus side, the packaging is pretty sweet. And it comes with stickers! Awww yeah.