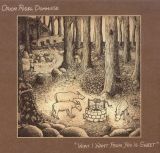 Orion Rigel Dommisse is my favorite musician on Greg Weeks’ label Language Of Stone. She isn’t as psychedelic as most of the artists on that label, though her music has too wide a variety of instrumentation to be considered traditional folk. It’s not so much instrumentation that it overwhelms you, but more than enough to keep you wholly interested. She had quite a folk all-star line-up on her album as well: Greg Weeks on synths and guitar, Margie Wienk of Fern Knight on cello, and Jesse Sparhawk on the harp. You don’t get such people playing on your album unless you’re pretty damn talented, which Orion is. She has a slightly odd voice, though one that’s still very pleasant. Her lyrics are considerably darker than most you’ll find in folk music these days, which is a delight for the more morbid among us.

While three of the songs on her album What I Want From You Is Sweet have “death” in their titles and one has “suicide” in its title, the songs are generally far from depressing. They are certainly downbeat, but not depressing. Her song Drink Yourself (To Death) has an amazing chorus in “Drink yourself to death so I don’t have / have to see you again / I know, my love, it sounds cruel / but I’m not the one killing you.” Alright, that’s a little depressing, but it’s sung so beautifully that I barely notice. Her song Fake Yer Death is almost amusing as it goes into detail about, well, you know. To end on a more positive note, she’s writing songs for her next album which I suspect will be just as great as her first.