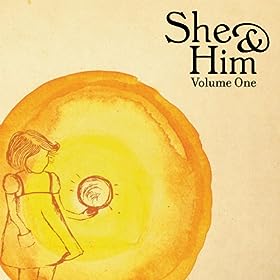 If Hugh is the proverbial Master of laziness, then I would surely have to be the Apprentice. I do have an excuse though, so I guess that makes it ok. R-right? Furthermore, I don’t know if anyone actually listened to the music I posted, but hey, onwards we march.

Today I have for your delectable listening pleasure the dulcet tones of Ms. Zooey Deschanel, a.k.a. the She in She & Him. Having seen her in the totally awesome “Hitchhiker’s Guide to the Galaxy”, the news that she also sang was enough to pluck away at my heartstrings! Or something like that. Zooey is joined by M. Ward (whom we haven’t written about for some reason!) to provide us all with some lovely folkey, country tunes. There’s even a Beatles cover in this album (I Should’ve Known Better), and it’s pretty darn good.

Oddly enough, I even have media for you all, and it’s not some dodgy Flash thing either. It’s an actual MP3! Along with this, I would go ahead and check out the aforementioned cover, as well as This is Not a Test, all of which can be found on their debut album, Volume One.