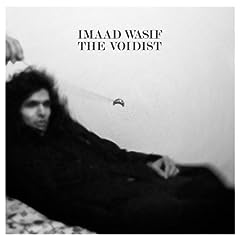 Like m’colleague, Hugh, I was pretty smitten with Imaad Wasif’s first solo album. I believe his words were “I think I’m in love”, and they’re sentiments that I also reflect. Unfortunately for me, I forgot to keep checking up on Mr. Wasif, so you can all thank the revival of either/or that I’m here to alert you to his newer stuff.

Since one of our mottos is something about being better late than never, I bring you The Voidist from the historical depths of… 2009. This is most certainly a different album to his debut, but it retains the dreamy vocalisation and mesmerising lyrics that defined it. There’s something kind of lo-fi with this release, almost as if it was recorded in the 60s or something: a bit of psychedelic twang and a darker sort of ‘flower power’ feel that moves way past the quiet, reflective mood of the debut.

As per usual, I am lousy with describing music! Also, as per usual, I have no MP3s, but I do have YouTube links and one to his page on the Tee Pee Records site.