After reading Ant’s snarky post about me being a lazy jerkhole, I took it upon myself to write at least one post for you guys. It’s not like I’m doing the hard work of making excellent music, anyway. Since I am indeed a lazy jerkhole, here is another lady that I’ve written about before, Sharon Van Etten. She has the kind of voice that sounds like it’s been submerged in whiskey, and that is a great attribute for folky music. Her debut, Because I Was In Love, was a bit sparse, musically speaking, but her second album, Epic, has some more instruments thrown in. Tambourines, even! Either way, stop reading this pointless banter and listen to these gems.

From Because I Was In Love
For You – YouTube

…for four weeks. I shall be winging my way around the US of A in that time and will not have any time to do updates for you all. Not to worry though, we’re not going away for good or anything. There shall be content as soon as I return (or rather, as soon as the jet lag is dealt with). Now, my comrade, Hugh, could come along right now and post his little kiester away, to completely remove the validity of this news post, but I doubt that’ll happen! (*cough* Post some stuff, Hugh! *cough cough*) 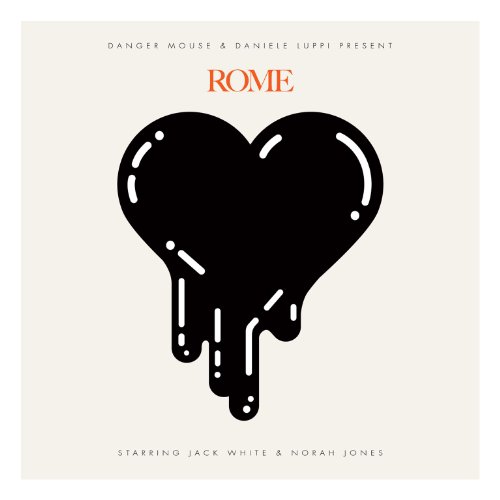 So I’ve never heard of Danger Mouse or Daniele Luppi (and for the purposes of this post, I will assume you haven’t either), but I’d wager a bet that you’ve heard of Norah Jones and Jack White? The latter of which being half of the White Stripes and the former being, well, Norah Jones? Perhaps that means you think you know what’s coming, given that they have graced a couple of tracks with their vocal talents for the album Rome, but you’d be entirely wrong.

Rome can be best be described as a kind of concept album, made to emulate the the classic scores of spaghetti westerns (most notably, the scores of Ennio Morricone). These old scores had a vivid warmness to the quality of the recording, as well as a brooding, kind of mysterious desert aura to them as well, all of which has been replicated wonderfully in this album. Having said that, the compositions themselves feel modern at the same time, meaning there’ll be something on this release that’ll grab you: I am most fond of Norah Jones’ contributions, as they are substantially removed from her usual repertoire but are still a perfect match for her vocal talents. Even Jack White’s work is good, despite me not being a particularly big fan of his.

So yes! It is certainly an interesting album. As lame as it is to say this, it’s definitely an album that’ll take you on a journey. Oh, and anyone using Google Chrome: check this out.

It is time to bust open this place with a dose of rock infused pop stylings! I’m finding it a bit hard to get into a lot of pop these days, particularly what’s coming out of the indie scene. To me, it feels like they’re trying too hard to have this ‘yeah, totally don’t care and you’re gonna hear about it’ attitude, and it comes across as a little pretentious and over the top. Much like my writing. As such, it’s really nice when you hear something and it just makes you bop your head, which is evidently the universal indicator of good music.

The Demos fit firmly in that head-bopping category. It’s just really fun to listen to, or effortlessly listenable to get a bit more technical. Their music kind of reminds me of Beulah’s more upbeat tunes (like Weight of My Tears) with a pinch of the Dandy Warhols for good measure.

Guess what: I actually have an MP3 for you! Gadzooks, it is one of those days, folks. Like a lot of my posts lately, they are also featured on Bandcamp, which means free streaming music or a dirt-cheap downloadable option.