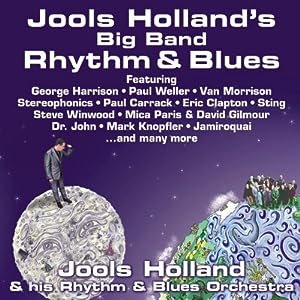 Horse to the Water

I always used to associate Jools Holland with some kind of delicious, fruit-drenched candy. “One bag of Jools, please!”, a potential exchange might have gone. Alas, using that line at a store resulted in bizarre looks from the assistants, and further disappointment would rise once proper research was completed. He is a fairly successful musician and television host though, so I guess I’ll forgive him for fooling me into thinking I’d soon be in fruit-flavoured paradise.

Holland has had the chance to work with some rather illustrious musicians over the years, including the wonderful George Harrison. This song is actually written by Harrison, though the accompaniment was recorded by Holland’s band, Jools Holland’s Rhythm and Blues Orchestra. The sad thing about this song is that it’s actually Harrison’s last studio recording, and he was only able to contribute the vocals: he was too weak from the effects of cancer to play guitar for it. Wikipedia informs me that “he listed the song’s publisher as ‘R.I.P Music Ltd’ instead of his usual music company Harrisongs”, and since Wikipedia is stone cold fact, I must surmise that Harrison was more awesome than I possibly imagined.