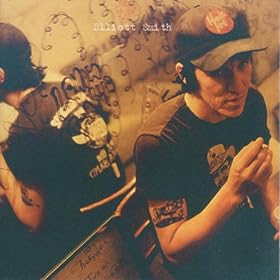 “What is a poet? An unhappy man who hides deep anguish in his heart, but whose lips are so formed that when the sigh and cry pass through them, it sounds like lovely music…. And people flock around the poet and say: ‘Sing again soon’ – that is, ‘May new sufferings torment your soul but your lips be fashioned as before, for the cry would only frighten us, but the music, that is blissful.”

That’s from Kierkegaard’s Either/Or, which gave this album and, by extension, this blog, its name. The first time I read it, I went “yep, that sums up Elliott Smith pretty well.” One of the very few singers who could share his personal problems so eloquently, so beautifully, that it may cause you to wonder what’s stopping the rest of them.

If you’ve ever been to songmeanings.com, you’ll know it’s a lyrics site where the users try to decipher the meaning of the song. In the case of Elliott Smith, a good 90% of users say all of his songs are about drugs and/or suicide. One sarcastic user wrote “This song is about committing HEROIN while shooting up SUICIDE!”

It sounds like this track off of Either/Or meant Smith dealt with this in his lifetime too, with lyrics like “so sick and tired of all these pictures of me / completely wrong / totally wrong.” The song’s more about how he thinks it’s messed up that he’s becoming famous for being depressed. Or that people think they know him from his songs or dare I say, pictures. A lot of the people who actually knew him say they barely knew him, because he wouldn’t let them.