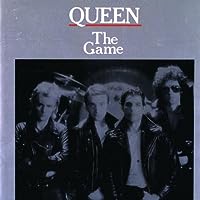 While I was certainly aware of Queen growing up (We Will Rock You featured prominently), this song is yet another prime example of me not linking a song to a band. To be fair, this really doesn’t anything like a Queen song, so you can hardly blame me. Particularly when I only ever heard this on the radio.

Anyway, if you think it sounds a bit like a Elvis song, you’d be right: Mercury wrote it as a tribute to the King. And he wrote it in about ten minutes too, proving that we’re all just talentless hacks.