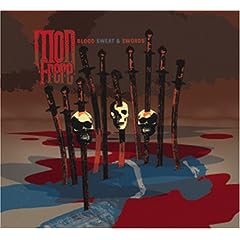 Despite the recent (well, not so recent anymore) rash of French bands we’ve mentioned, here is one that has a French name, but hails from Seattle. Also unlike the previous bands, while Mon Frere rocks, they do so with a touch of electronic playfulness, while at the same time not being too playful. If you were to mix Dover’s latest album (which most of their fans hate, but not me!) with The Gossip, you would end up somewhere in the delightful realm of Mon Frere. I haven’t heard anything off of Real Vampires besides the track listed below, but I can certifiably state that Blood, Sweat and Swords is consistently outstanding. I don’t think I’ve used that adjective to describe music yet, so there it is.