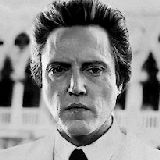 It’s nearly the end of March, which means it is time for another mix. All of them are free and legal, which is good news for me since then I don’t have to pay for any bandwidth. Living the good, cheap life is the only way to live… at least when you’re a cheap bastard. And don’t tell me you’ve seen a cooler picture of Christopher Walken today, because you haven’t.

Calla is an awesome band that I could never recommend enough, and that should be enough for anyone (or at least those who bother to respect my opinions!) Bronson is off their latest album, and while they get more mainstream with every new album, they’ve done a good job of not alienating their fans.

As I’ve mentioned before, Jeff Hanson has a decidedly feminine voice. If you are into that sort of thing, then you should definitely give him a listen. If not, then don’t. Any possible problems: avoided!

Hey Momma might be the best song ever. It has everything you could ever want, at least if what you want are awesome vocals, awesome melody, and awesome lyrics. To summarize, it is probably the awesomest awesome to ever be awesomed. That might be a slight exaggeration, but not by much.

Patrick Wolf is the best young songwriter alive. This song comes from his second album, Wind Of The Wires, my favorite of his. His latest album didn’t sit that well with me overall, but I suspect that was due to my overly high expectations rather than anything Mr. Wolf did.

The notion of me liking this song makes me feel like a sappy loser, but it’s just such a nice song that I can’t help but like it, even if my name isn’t Daniel.

This song makes me laugh every time I hear it. The Nymphets are from Canada, but their singer sounds exactly like the singer for Bishop Allen. The main difference to my ears is that this song has a lot more cussing, but honestly… very Bishop Allen.

This song is one of the best songs I’ve ever heard from a band I’d never heard of. It’s nothing revolutionary, but quite a good slow indie song nonetheless. It’s from the band’s ninth album as well, which means there is quite a discography for me to check out.

I’m not sure if I’ve heard any other songs from The Veils outside of this one, but if they sound anything like this, they would be excellent. Piano-indie-pop from Britain, with distinctly familiar vocals.

Here’s a case of me saving the best for last. I actually removed some songs from this mix (you’ll hear them next month instead) just so this would indeed be the last song here. While it has lyrics like “Oh Marianne, who cut you down to size, who slashed your throat, plucked out your pretty eyes,” it’s not as scary as it probably sounds. If I could get away with it, I’d have a mix consisting of just this song looped for an hour. Really.