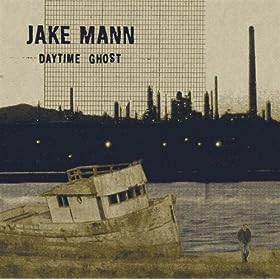 I might just be the worst blogger in the history of existence. OK, perhaps not. But considering I told Jake Mann that I’d write about his album Daytime Ghost last August, clearly something went wrong. I like to call it “getting a girlfriend,” but even so, six months is a ridiculous wait for anything. This review is incredibly overdue, but better late than never. R-right?

Anyhow, the album starts off with some pretty fuzzy guitar playing, which is always a good thing. Indeed, the guitar playing is one of Mann’s greater strengths – the fuzziness is just a bonus. The riff that kicks off Mudflat is damned good, so much so that it allows me to ignore my dislike of spoken-word material, which is quite a feat. His lyrical ability is not slacking, either; Edie in Hades starts off with a quite sinister lyric, “Somewhere in the depths of hell / They made a place for you,” and though he sings it like he’s said it before, it doesn’t make it any less awesome. But like I said, the guitar playing is really what shines throughout the album, especially in Mudflat, Beat The Drum, and Wallfollower. The standout track for me is still the one I’d heard before, Take You For A Ride, which was on his single that I wrote about before. It combines good lyrics with good music and good singing, which I guess is what makes a song good! So again, if you are into guitar music, then Jake Mann is the mann (pun sadly intended) for you.