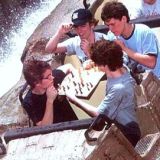 I have not posted a mix since July last year, can you believe it? I barely could, even though procrastination is something I am quite skilled at. That is not a good thing, but better late than never. Enjoy the free songs, you slackers. You should try something more productive, like playing chess on a logride. You’ve probably never even thought about trying that, you were busy slacking so much.

This is a damned good song by a band I’d written off. Their debut was quite good, their follow-up sucked, and their latest has this song, so it can’t be all that bad. The song’s good enough to motivate me to check out the rest of the album, which is high praise coming from me.

It’s a catchy little tune, and while it sounds quite British, the band hails from Kansas. God bless America. Strangely enough, at the end, it starts to transform into another song, but gets cut off. It is kind of like one and a half songs in one.

This is quite low-key, and by that, I mean it will put Doug to sleep. It reminds me of a band I’d love to get back into by the name of Slut. Searching for their music can be rather challenging sometimes, as one might imagine.

Apparently it is passe or some such to write out lyrics to a song in a review, but I like them, so tough noogies. I’ve always had a soft spot for spiteful and cynical lyrics, so I loved “I know that you don’t care / So tell me why you ever acted like you did”. Not to mention the song itself is a pretty nice, slow, indie number.

This sounds like a high-energy Canadian indie-pop song, and that’s because that’s exactly what it is. Enjoyable, and I quite like the chorus.

Not only is the name of this band outstanding, this is a good stoner rock song. It almost creates a new genre, indie-stoner-rock, but that title would just be ridiculous. Just listen to it and you should see what I’m saying.