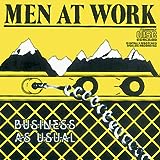 There are a handful of songs throughout recording history that are quintessentially Australian. Why? Because they reference the country, and because whenever they’re played in public, pretty much every will sing along. Yesiree, we are simple folk. None of these songs do anything to dispel the stereotype that we are all bush-dwelling, kangaroo-riding hicks, but WHATEVER. Koalas are hella snuggly at the foot of a bed; YEAH THAT’S RIGHT KOALAS ARE OUR VERSION OF DOGS.

Down Under has more Australian references than you can shake a boomerang at, but it’s that iconic pan flute motif throughout that has made an indelible mark on the Australian populous. So much so that we all collectively gave the finger to those copyright allegations, and the subsequent re-recording.