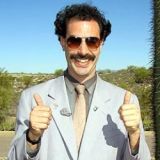 Borat! He is the image for this post because, well, look at him. He is quite the beacon for excitement! Anyhoo, you’ve seen this sort of post format on many blogs, surely, just a big mess of songs. All the bands that you have to listen to to fulfill a position as a mugger (my term for music blogger), you will not like them all. However, even if I end up not liking the band, there are many instances where they only have one song that I like, or at least they only offer up one song that I like (OR I’ve only heard one song, it’s the only one they offer, and it’s great). These songs here, they are those. If you don’t enjoy any of them, there is either something wrong or something terribly right with you.

Here’s a song that mixes repetitive nu-indie melodies and the lo-fi amblings of indie yore and manages to make a quite enjoyable song out of it.

This one is a lot of the lo-fi, fuzzy ambling of indie yore, though the singing reminds me of Kurt Cobain. Not a song to get worked up over, but definitely not one that sounds like it came out this year, let alone decade.

Ah, here is something of a crazy tune. It combines the experimentation of post-rock with the non-suckiness of rock, not to mention some slurred vocals. Mmm, slurring.

Lauren Hoffman is awesome, and this song reminds me of Dido’s debut album, mostly during the chorus. Most of her songs are not like this one, but are still good in their own right (especially Another Song About The Darkness, though the version of it on KRS’ compilation album was better [in my opinion]).

This starts off as a slow ballad, and then kicks into high gear about a third of the way through. That is the formula for an epic song, and even though this one’s only three and a half minutes, it somehow retains that epicness.

Female-fronted rock… that is just about all you need to know to enjoy this song. It even has some hooting! You don’t hear that in songs much, and perhaps for a good reason, but this song makes it work.

Here’s a slow burner that stays a slow burner the whole way through. The singing’s in French, as this is a Canadian band, so I hope you are not all about the lyrics. It took me a few minutes to appreciate, but it’s a rather lovely song.

This song was on songs: illinois some time ago and is one of the main reasons they’re on our blogroll in the first place. “I tried to call you Angelo, you wouldn’t pick up a phone, you wish I said that I didn’t need you, but baaaaaby, I’m not that strong!” Awwwww!

3hive hit the nail on the head when they posted this song and picked up on the huge Elliott Smith inspiration. Lots of acoustic melody and a piano solo. It really does sound like it could be by Mr. Smith, and even the lyrics are quite excellent. I wish the whole EP was like this song.

I dedicate this song to my “sister” for being a dickhead to her, especially since her name is Mandi (close enough). The majesty of song saving the day again. Everyone loves pop romps, right?

Luminescent Orchestrii is one of those bands that you might be hesitant to listen to due to the somewhat ridiculous name, but end up doing so anyway because you enjoy slightly ridiculous names. They will greet you with violins that can be quite rambunctious or simply relaxing. For those of you who prefer some excitement in your life, start with the music from the top, and for those who prefer relaxing songs, start with Moon Song. This band also has the distinct honor of being one of the only bands that consistently makes instrumentals that don’t put me to sleep, which is something of a feat considering how vocal-centric my ears seem to be. And because everyone likes lyrics, here’s some: “If you come a-knockin’, honey I don’t mind \ But if you’re not here for lovin’, baby don’t waste my time!” This would have been a good band to post on Valentine’s Day if I wasn’t such a cynical bastard… alas! 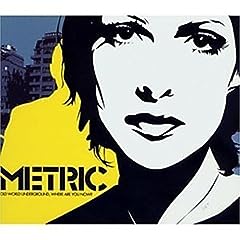 I probably shouldn’t post about bands that everyone (or at least a lot of people) already know about, but oh well! For the nine of you who don’t know about this band, Metric plays rock that’s quite inspired by new wave, which as it turns out is a great idea. I am almost certainly biased towards this band due to my feelings towards their singer, Emily Haines (of Broken Social Scene fame), but it is not my fault that she is a great singer who’s managed to avoid being beaten by the ugly stick. The music can be a bit trite, but that doesn’t make it any less enjoyable. 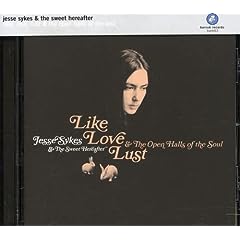 I realize Jesse Sykes is something of a blog darling as of late, but I’m glad for that, because otherwise it wouldn’t be as likely that she would have graced my ears. She doesn’t exactly have a pretty voice, but it’s nothing husky, either. In other words, something very fitting for folk-country, which this more or less is, though much more palatable to my ears than most bands in that particular genre.

The banjo on Doralee and Lonely Still makes me recall the death-country banjo stylings of Elliott Brood, but that seems to be the case for just about every band that uses a banjo. Just that old-timey feel, I suppose. Despite all that, you should really check out Station Grey first, because I did, and that’s how you’re supposed to get into music, so you follow the same path to enjoyment that I did. Once that one sinks in, head straight to Tell The Boys, one of my favorites of hers (along with Don’t Let Me Go). 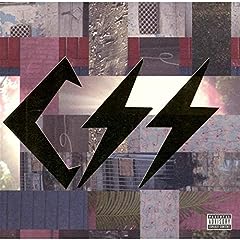 I have never been a fan of Valentine’s Day, which can mean only one thing – I’m a guy. To celebrate this, the most dubious of all holidays, here’s some Cansei De Ser Sexy (translated to Tired Of Being Sexy). They are Brazilian, but really do not sound like it, accent or otherwise. Playing them in my friend’s car last night, he assumed they were American or British. That is just the way the electro-rock cookie crumbles, I suppose. Either way, their lyrics in This Month, Day 10 suits my cynical treatment of romantic holidays quite nicely. For instance, “If someday we get to meet again in a car crash, plane wreck, or terrorist attack, or maybe next Thursday night, don’t bother saying hi!” Ouch. Happy Valentine’s Day! 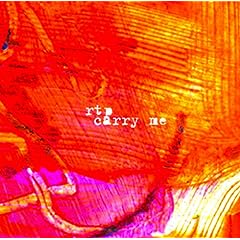 There are two things worth mentioning about this band. The first thing, which is less important but definitely more interesting, is their ID3 tags. For some inexplicable reason, one is tagged as being by Pedro Guerra. The second, more substantial item, is these songs rock. People will always talk about whatever mediocre band is the new hotness, but with songs like these, Royal Treatment Plant should be the buzz. I don’t know whether I’m happy about how they aren’t, but it suits my elitism just the same. Despite all the crazy, modern, gypsy-influenced bands floating around on either/or, it’s nice to know that there’s still some groups around that play pure, unadultered gypsy music. Monsieur Camembert is one such band. An Australian group, these folks seemingly like to play in the waters of gypsy, folk and a range of Eastern European music. Lots of accordians and goodness knows what other manners of gypsy-flavoured instrumentation. By and by, they’re largely an instrumental group, but they do have some tunes with singing, like Adon Olam and Kiss of Fire.

Unfortunately, their website does not have media, which is a darn shame, but I guess it’s my tradition to post about bands that have no media. Check them out, if you can, or if you want some old-school gypsy charm.

Michele Wylen is one of those singers you listen to and think “wow, she must be really popular.” Then you Google her not-very-common name and she manages to be #4, which is something of a travesty, considering how lovely and smooth her voice is (think Mirah). Throw in some keyboards, synths, and the occasional percussion (Sweet Subtlety has a handclap beat throughout most of it), and you’ve got some goddamn songs, man. It’s true that vocals will make or break songs for me, but if her voice on Loopy doesn’t do it for you, nothing will, ever. The rest of this EP is on her webpage, too. 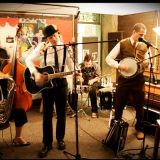 I’m fairly certain it’s not at all necessary to mention the bands that 3hive writes about, but when the bands are this good, you can’t help yourself. The fellows and one lady that comprise The Scarring Party play their own kind of superfluous genre, or at least one that I haven’t heard; they are the first band I’ve ever heard that uses an accordion, a banjo, and have vocals and lyrics that remind me of good modern cabaret (and manage to pull it off). In that sense, they remind me of Reverend Glasseye, Jason Webley, and Nicki Jaine, but not singularly. Maybe if you mixed them all together you’d have something close, but that sort of devilry is currently impossible. You can listen to Eye and Devil Knows Where on their Myspace as well.

If you’ve ever been to rathergood.com, then you may be indirectly acquainted with 7 Seconds of Love (not to be confused with the similarly-named hardcore band). If you haven’t, please go there and watch some of the videos. Most of them have little to do with the band (such as We Like the Moon), but some are basically Joel Veitch’s version of music videos for the band’s songs (such as Ninja).

They are a goofy ska band that manages to have a lot more class, musical skill, and songwriting prowess than any other goofy ska band I have ever heard. And even with their DIY attitude, their audio fidelity is excellent. They do not have a label or have any official pressings, but due to a recent settlement with Coke (a subsidiary ripped off their Ninja song without any credits), they’ve now got the funding for an EP in the works. Plus, the rest of the settlement was given to charity, which is just further proof that these dudes are awesome.

All of their music is available freely from their site, both as MP3s and (for some of them) videos. Left unchecked, I would link them all here, but instead I will trust that you will visit their site if you find these few intriguing.